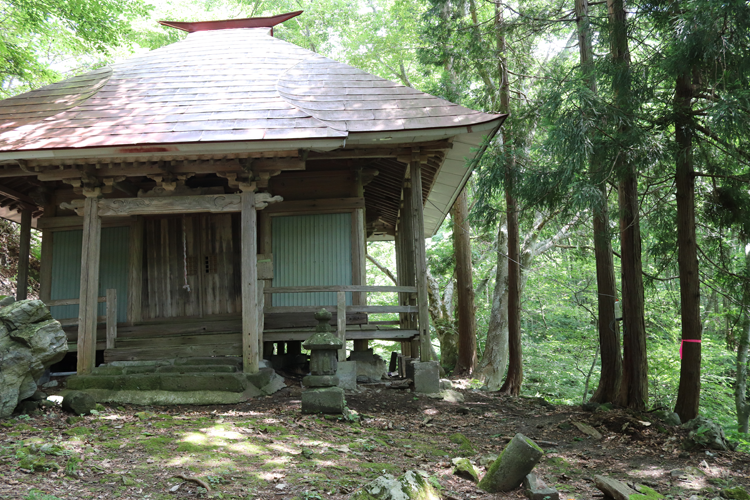 The secret Buddha quietly protects from this power spot in the mountains.

It is built on a mountainside, with old pine trees growing all around, making it a lush green power spot.

The history of this temple is old. When the propagating Buddhist Priest, Kobo Daishi, visited Oshio in 812, he carved two Akasagarbha boddhisattva images from one tree. The part carved from the bottom part of the tree is enshrined in Oshio and the part carved from the top of the tree in Yanaizu. The Akasagarbha boddhisattva of Oshio is said to be the older sister of the one in Yanaizu.

The principal image of this hidden Buddha is a wooden, gold leaf, sedentary image (seated statue).

There is a gigantic rock with a height of 30 metres in the northwest of the ancestral hall. Its base is a cavern with a height of 2.7 metres, and originally, the principal image was placed there. Today, there is a stone statue enshrined inside. This gigantic rock formation is a masterpiece that you should actually see with your own eyes rather than simply in a photograph.

The surrounding area is a park with a parking lot and promenade, and it is popular as a nature path. 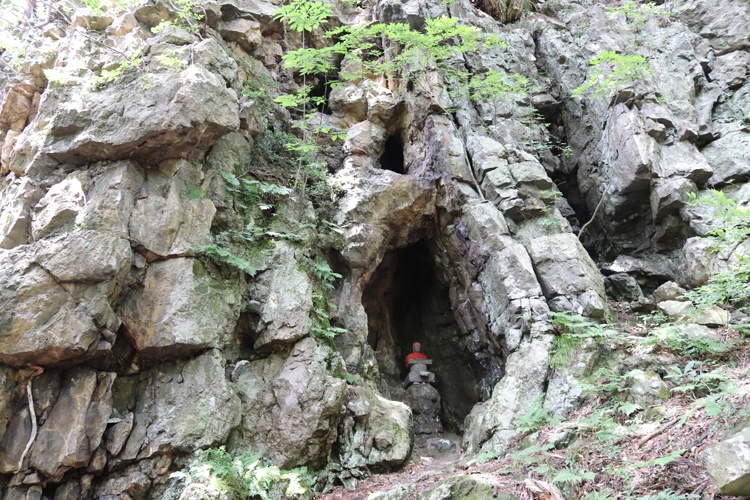 The ground extends 27 meters from east to west and 11 metres from north to south.

[Access]
From Urabandai, take national road route 459 to Oshio. There is a private parking lot on your left-hand side. The nearest bus stop is Oshio Shinden.
The entrance to Kokuzo Bosatsu Akasagarbha is on the opposite side of the parking lot.

Although it is not far to walk, there is a slight climb of the mountain road, therefore, non-slip exercise shoes are recommended.

Tateiwayama Kifukuin Oshio Temple was managed by priests until the beginning of the Meiji period, but after that it came under the administration of Oshio Ward.

According to ancient texts, under the imperial reign of the 52nd Emperor Saga, Kobo Daishi came to Oshio on foot during his travels through the provinces to pray for world peace, bountiful grain harvests and good fortune for the villagers in front of the Tateiwayama Ryuzo Gongen Bosatsu Akasagarbha statue. That is why, since ancient times, the temple has been revered by the people.

There are towering rocks named Tateiwa at about 900 metres above the village, and in the past it was said that the Kokuzo Akasagarbha was enshrined in this rocky cave, and there was a worship hall towards the southeast.

The Akasagarbha boddhisattva of Oshio is said to be the older sister of the one in Yanaizu.

It is written in the “New Edition of Aizu Topography” that the temple is 78 square metres, and the grounds extend 27 metres from east to west and 11 metres from north to south. It is managed by Kifukuin Temple. According to the Kifukuin Oshio temple ancient documents the current temple was built in June 1789.

During a Buddhist survey on the 10th of August, 1987, Aizu cultural properties researcher Mr Masaki Sakai found the interior inscription of Kokuzo Akasagarbha as shown below:

It is said that the priest of Kurinomiya, of Yukawa village in Kawanuma Ward, oversaw the Kokuzo Akasagarbha statue’s complete reparation by the sculptor Kihei of Wakamatsu in 1980.

The statue is covered is genuine black lacquer coated in gold leaf paint, but over time the gold leaf has peeled off, revealing most of the underlying black lacquer. Nevertheless, it is still a stunning statue.